Bagumbayan, a hotspot no more?

The controversies during the May 2010 elections were so bad, Taguig was declared a hotspot for today's barangay elections. According to the report below, however, the elections held were relatively peaceful and orderly - primarily because, at least in Bagumbayan where all the media coverage was, the candidates ran unopposed.

For the latest Philippine news stories and videos, visit GMANews.TV

Perhaps to disabuse folks of the notion, a man was promptly shot outside a polling precinct in Taguig.

Update on the barangay elections

GMA News is reporting that supporters of some candidates in Taguig were still distributing campaign materials this morning, on the day of the elections. As usual, the culprits claimed to be unaware that what they were doing is prohibited by law.


For the latest Philippine news stories and videos, visit GMANews.TV
Posted by Meg at Monday, October 25, 2010 No comments:

The last thing we need...

We, Taguig residents, are so lucky to have a great bunch of "public servants."
Let's see, our Mayor is being sued by the BIR for failing to present the city's books of accounts for 2008.
There's an ongoing war between the councilors, a majority of whom are supporters of losing mayoral bet and former Supreme Court Justice Dante Tinga, and the Mayor. The Mayor is being sued by them too.
Showing she can dish it out as well, the Mayor has accused the former mayor of unlawfully giving away (by way of "midnight" donations) the city's properties, including lots, equipment and service vehicles to the barangays which supported the Tingas.
In the meantime, the criminals are holding court - there are daily reports of carnapping, hold-up,and men being shot at. But hey, politicians have no time to attend to these things. They're too busy fighting amongst themselves.
Posted by Meg at Sunday, October 17, 2010 No comments:

Garbage in, garbage out 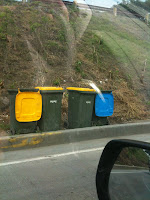 I'm starting to see some positive signs from Mayor Lani. During the transition period between the old and new administrations, it was a common sight to see piles of uncollected garbage being indiscriminately dumped by irresponsible citizens on sidewalks.
Recently, I started seeing garbage bins in these same areas. This, coupled with regular garbage collection have lessened the city's garbage woes. Kudos to all concerned!
Posted by Meg at Sunday, October 17, 2010 No comments:

It looks like Puregold will be opening a store in Taguig soon. It's located along M. Almeda Street, near the Taguig City Hall. An approximate location has been posted at wikimapia, for those interested. It's not clear yet, however, what type of grocery will be opened - Puregold Jr., Puregold Extra or Puregold Price Club.

I pointed out the lack of groceries in Taguig in an earlier post. So this is actually welcome news for Taguig residents like me.
Posted by Meg at Saturday, October 16, 2010 15 comments: